Need a crowd pleaser on the holidays? The Jurassic Joe Dinosaur show is interactive, educational, relevant, accessible and of course, great for mumosaurus and daddydactyl too. It’s a 45-minute, fun-filled musical ride through the amazing world of prehistoric reptiles that gets the whole family singing, dancing, laughing and learning.

Click here to see a Preview of the Show

Over the past 1 million and 5 years, Jurassic Joe and Jurassic Jayne have presented the show at libraries, preschools, schools, museums, Australia Zoo, festivals from Sydney to England, Portugal and Germany, and in extended seasons at the Queensland Museum. 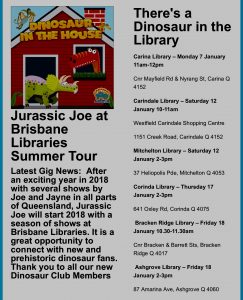 “We really enjoyed the show. I took my 5 year old son as he is a huge dinosaur fan! The venue was great as it was small and intimate. Jurassic Joe got all the kids (and adults) singing and dancing/stomping like dinosaurs! It was just the right length of time to keep my son interested and although he invited kids to go up on stage there was no pressure, and he still interacted with those who stayed in their seats. My son came home and was singing the songs and teaching his little brother the dinosaur stomp!”      Jo Orpin Hatton, Primary Times, UK

“Engaging, educationally appropriate and meaningful, filled with loads of musical fun and learning. We give the Jurassic Joe Show a big Dino ROAR. We would love to see and hear more and continue to rock the floor. Ten out of ten and value for money! Outstanding!!!”     Jenny Du Frocq, St Mary’s Community Preschool

“Hi Joe,    We saw you perform recently at Brisbane Square Library which my 2 year old son and I thoroughly enjoyed. We also purchased your CDs. Just wanted to let you know that they’ve been a huge hit and my son has learnt so much from the songs. It’s also made long drives with him so much easier. Before he’d fuss and moan most of the way but now he’ll hop into his carseat before we’re even ready to go waiting to listen to Jurassic Joe. So thanks again for making great kids’ music! Cheers.      Angela and Fletcher” 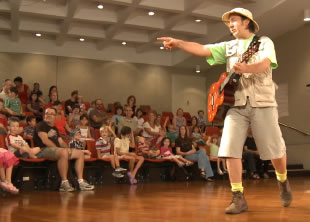 is for public venues only (for a private party, click the ‘party’ tab, above). Gift bags and merchandise can be made available. Price will be negotiated depending on number of shows, crowd numbers and leagues travelled. We accept Mastodon Card and Dollars Australis.

Child development is at the
forefront of our shows, making
learning fun and memorable.